Product prices and availability are accurate as of the date/time indicated and are subject to change. Any price and availability information displayed on [relevant Amazon Site(s), as applicable] at the time of purchase will apply to the purchase of this product.

When you’re sick, mucus can be a master of mayhem. But quick, longlasting chest congestion relief is just a dose away — with Mucinex SE extendedrelease bilayer tablets. Guaifenesin, the active ingridient in Mucinex SE, helps relieve chest congestion by thinning the mucus in the bronchial passageways to make the cough more productive. The bilayer tablet releases immediately and lasts for up to 12 hours.* Mucinex In…Mucus Out

When mucus builds up in your chest, congestion can get in the way of your day. Mucinex extended-release bi-layer tablets fight bothersome chest congestion for 12 hours so you can focus on your life and forget about congestion. 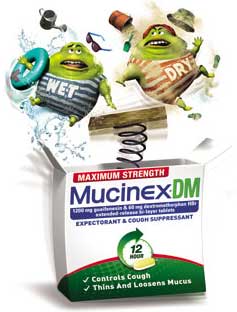 Mucinex extended-release tablets break up the mucus that causes chest congestion, providing you with fast-acting and long-lasting relief. With 12 hours of relief from chest congestion, you can make it through a workday without congestion getting in your way.

Get 12 Hours of Relief

Only Mucinex has an extended release bi-layer tablet to deliver congestion relief. The first layer is absorbed quickly by your body for fast-acting relief. The other layer dissolves slowly to continue relieving your chest congestion for 12 hours.

Mucinex: #1 with Doctors, Pharmacists, and Consumers

You’re too busy with family, home, and work to let sickness slow you down. You need a brand you can trust to get the job done. That’s why there’s Mucinex. Mucinex is the #1 doctor recommended1, #1 pharmacist recommended2 3 and #1 most popular4 OTC expectorant brand. Mucinex products all have the dependable, mucus-busting power to show Mr. Mucus the way out of your system so you can keep up with life.

What’s in the Box

One box of Mucinex extended-release bi-layer tablets (100 tablets per box).

Mucinex Has Products for All of Your Worst Symptoms

There are no reviews yet.